Xavi .. Did he come to replace Messi? 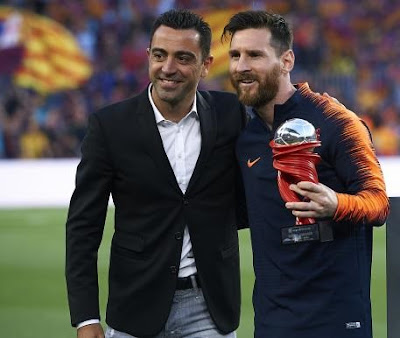 The Qatari Al-Sadd coach, the former international player Xavi Hernandez, was appointed as a new coach for Barcelona yesterday. Others believe that the task is difficult, because the team’s problem is not in the name of the coach, nor his level and capabilities, as much as it is in his management, which does not have the necessary vision and project, nor the necessary financial resources, and in the absence of heavy names in the squad that can make the difference that Messi has been making for more than a decade For a while, all the coaches won titles with him, at their different levels, but when he left, Barca became a normal team. The coach alone, whatever his name and abilities, would not save him from his current situation, if he was not supported by new stars, he would give them enough time, and the administration and the press would be patient with him, Which may not be available to Xavi because of the public pressures that are accustomed to winning titles.

The truth is that Barca did not choose Xavi, and he had no other options at all. Rather, circumstances forced him to go towards his former player as a fait accompli that had no alternative to replace Ronald Koeman and save what could be saved. Therefore, it is not possible to talk about a choice or a new project, intended to give a new breath only and to satisfy the fans angry at the administration because of its management of Messi’s file, and the post-Messi time, so that no one can predict the fate of Barca in the short and medium term, in light of the lineup that is available On it, and the coach’s lack of experience, which is limited to his experience with the Qatari dam, which is not considered a criterion for measuring the extent of a man’s ability to change the face of Barca, or even improve his return and results, in light of a normal human composition, no longer convincing and enjoying, he failed to win in the last three matches in the league.

Xavi begins his duties after the Celta Vigo match during the international break waiting for the winter Mercato and what the club management can offer from the generosity of new assignments, which the coach has stipulated in exchange for taking charge in these circumstances, because without them his task would be very difficult, in light of the frequent injuries For Othman Dembele and Sergio Aguero, where he started talking about the possibility of bringing in Raheem Sterling from City and Cavani from Man United, or Alexandre Lacazette, Arsenal striker, in addition to other undisclosed deals, which will be necessary for Xavi and Barca to overcome the post-Messi phase, which came early and surprising, increased it The complexity of the repeated injuries of a large number of players, and a stifling financial crisis exacerbated by the decline in incomes and the increase in the volume of debts, in addition to the decline of advertisers and publicity in the time of Corona, in which the global economic crisis intensified.

Just joining Xavi with Barca may constitute a useful psychological factor for the players, but it will not solve the team's multifaceted problems, and will not compensate for the existing deficiencies, because the Catalan club will need abundant money, great effort and long patience, and need more time to find another Messi and form another team with a coach who does not have Experience or experience, and no one knows his technical and leadership abilities for a team of the size of Barca, Guardiola succeeded with him at the beginning of his training career because he included Messi, Xavi, and Iniesta, and others succeeded after him in achieving titles, because Messi was present making miracles in a team that was all playing from His time and depend on him, and when he left suddenly, flaws appeared and the matter of a team that depended on the skill and magic of one star was revealed after it was teeming with stars.

It is too early to judge Xavi for success or failure, but it is certain that he will not compensate Messi. It is difficult for him to find a new Messi to depend on in a short circumstance, and he is well aware of this, but he was not able to refuse the task that every coach dreams of, even in these difficult circumstances, Especially since Barca had no other choice