Why Koeman left and remained Solskjaer? 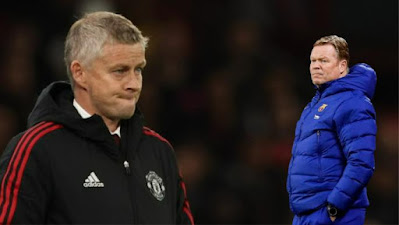 Why Koeman left and remained Solskjaer?

Despite their failure in their duties at the helm of Barcelona and Manchester United, the common denominator between Ronald Koeman and Ole Gunnar Solskjaer did not lead to the same fate after the negative results he scored and the public and media pressures they were subjected to since the beginning of the season, which the Barca administration did not withstand and preferred to temporarily compensate the Dutchman. With Sergei Barjuan to absorb the anger of the fans, even if it cost her to pay 12 million euros in compensation for the dismissal, while the Man Utd administration was forced to give a new chance to its coach, or postpone the decision to a later date, especially as the team is on the verge of two important dates this week against Tottenham in the league And Atalanta in the Champions League, perhaps due to the difficulty of quickly finding a replacement among the potential candidates Antonio Conte, Zinedine Zidane, or even Mauricio Pochettino, the coach of Paris Saint-Germain, who is threatening to leave due to the lack of consensus on the way he works and deals with the team's stars.

Although it has not guaranteed the alternative so far, the Barca administration has not resisted public and media pressures, and hastened to respond to the wishes of the supporters after a long patience, knowing that Koeman is not solely responsible for the decline in performance and the accumulation of negative results, especially after the loss against the riyal on his field, Then in front of one of the neighborhoods of Madrid, Rayo Vallecano, to have his worst start after ten league matches since 2003, which prompted the appointment of his assistant Seji Barjuan temporarily, pending the final approval of the current coach of the Qatari dam, Xavi, who seems the most likely candidate to succeed Koman, but rather The only one who is able to absorb anger, because reforming the situation remains linked to other technical data and factors, and financial capabilities that allow the entry of the winter Mercato in order to support the team with new players from the club level, such as Raheem Sterling, for example.

As for the betrayal of Man United, it preferred to wait, perhaps waiting for Solskjaer’s resignation in order to avoid paying his dues until the end of his contract in the summer of 2024, or because of the support that the coach receives among his players, but the delay is likely due to the lack of a suitable alternative at the present time, especially since Antonio Conte does not find consensus among Ronaldo's companions and among the managers, and waiting to know the fate of Pochettino with Al-Biagi may be long, because the Paris club management is looking for an appropriate alternative to lead the ship to the crowning of the Champions League away from Zidane, who prefers to wait for the 2022 World Cup to end, to obtain his historic opportunity in Training the French national team, which remains a dream for Franco Algerian, and has been trying to achieve since he left Real Madrid last season.

Xavi did not officially agree to Barca's offer, and Solskjaer refuses to resign in the absence of an alternative, at a time when pressure increases on the eve of the launch of a new round of the league, and another in the Champions League, which will decide the fate of the two teams in the most important competition for them and be a decisive factor in determining the fate of the two technical models for two of the oldest and largest The clubs in Europe shook their throne after the loss to Real Madrid for Barca, and after the farce that happened to the Germans against Liverpool, and made the coach’s position fragile in front of his players, his managers and the club’s fans, who confirmed with time that the Norwegian would not be able to lead his team to achieve the local league title absent from the coffers Since 2013, the year Sir Alex Ferguson passed away, the model has not known stability after alternating Moyes, Giggs, Van Gaal and Mourinho, all the way to Norway's Solskjaer.