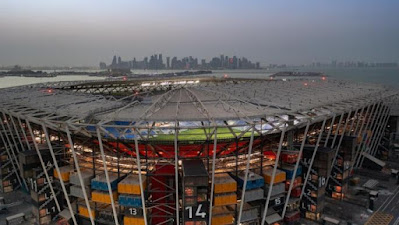 The Arab Cup will kick off in the

Qatari capital, Doha, at the end of this month, with the participation of sixteen teams from all over the Arab world. The tournament represents a golden opportunity to improve the operational plans and readiness of facilities for the FIFA World Cup Qatar 2022™, about a year before the start of the first edition of the World Cup in the Middle East and the Arab world.

The Arab Cup, which is being held for the first time under the umbrella of the International Football Association (FIFA), will witness 32 matches over 19 days from November 30 to December 18, and its competitions will host six of Qatar 2022 World Cup stadiums, including Al Bayt Stadium. Ras Abu Aboud Stadium, scheduled to be inaugurated on the first day of the tournament.

The final of the tournament will be held on December 18, exactly a year before the final match of the 2022 World Cup, coinciding with the National Day of the State of Qatar, according to a bulletin of the Supreme Committee for Delivery & Legacy.

During the Arab Cup, the best Arab teams from the continents of Asia and Africa will compete to win the championship title, which begins in the group stage, whose matches will continue from November 30 to December 7.

The teams participating in the tournament were divided into four groups of four teams each. The first group includes the teams of Qatar, Iraq, Oman and Bahrain.

The teams of Tunisia, the United Arab Emirates, Syria and Mauritania compete in the second group, in the third the teams of Morocco, Saudi Arabia, Jordan and Palestine, and in the fourth group come the North African teams Algeria and Egypt, along with the teams of Lebanon and Sudan.

The Arab Cup will host six of the eight stadiums that will host the World Cup matches next year, including Al Thumama Stadium, which opened last month during the hosting of the Amir Cup final.

Al Thumama Stadium is one of five stadiums that will witness the Arab Cup competitions, with a capacity of 40,000 seats each, which are Ahmed Bin Ali Stadium, Al Janoub Stadium, Education City Stadium, and Ras Abu Aboud Stadium, which is considered the first fully dismantable stadium in the history of the World Cup. Six matches in the Arab Cup, including the match for third place, while the sixth stadium in the tournament, Al Bayt Stadium, which has a capacity of 60,000 fans, will host five matches, including the final match on December 18.

In light of the precautionary measures to prevent the Covid-19 virus, all preventive measures will be applied to ensure the health and safety of all participants in the competitions. All attendees are required to adhere to the travel guidelines issued by the Qatari authorities and the directives of the Ministry of Public Health.

Tickets for the FIFA Arab Cup matches are currently available on a first-come-first-served basis through the website and from mid-November fans can purchase tickets at the FIFA Ticket Center at the Doha Exhibition Center near Al Qassar Metro Station.

Fans will be able to enjoy a glimpse of what awaits them during the 2022 World Cup, and attend more than one match in one day, thanks to the closely spaced nature of the tournament, which provides enough time to reach the stadium for the next match using public transportation, and here is a list of matches that can be attended two matches in one day .

All fans wishing to attend the Arab Cup matches are required to submit the approval number for the fan card application in order to be able to enter the State of Qatar and the tournament stadiums. Fans will be asked to collect their smart fan card from the fan card service centers in Qatar.

The fan card, which is a smart identification card, was designed to provide fans in Qatar with a great experience that includes many services and benefits. It is mandatory for anyone who holds a ticket to attend the Arab Cup matches, and is used for identification, and allows entry to the tournament stadiums accompanied by a valid ticket.

Fans from abroad can use the fan card to enter Qatar multiple times, provided they present a valid passport recognized by the Qatari authorities. The fan card will provide its holder with the ability to benefit from a number of services and benefits related to transportation, tourism, and more.

Fans must apply for a fan card immediately after booking the ticket and receiving the registration number via e-mail. Fan card applications can be submitted through the website (FAC21.qa).