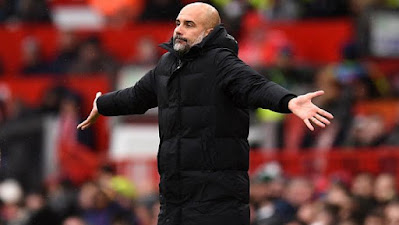 
No one disputes the artistic value of Spanish coach Pep Guardiola, who dazzled the world with a new revolution in the world of football, which left its mark wherever he went and flew.

It is the Spanish coach who has dispensed with what is called in the world of football by turning the pivotal and constant attack in the Argentine way, and playing with the imaginary striker who is not necessarily a striker.

History has provided us with how Pep dispensed with Eto'o in Barcelona, ​​Zlatan and David Villa, and relied on a comprehensive offensive movement led by Messi, Pedro and Bojan.

This philosophy, which Guardiola moved away from after he trained Bavarian "Bayern Munchen", due to the impossibility of removing one of the biggest strikers in the world, and talking here about the Polish spearhead Lewandowski, he quickly returned to it when he moved to train "sky blue" in a smart and gradual way.

The evidence is that the club’s historical scorer, the Argentine Aguero, has reduced his influence and presence in the first formation of the team due to Pep’s dependence, as usual, on an attacking group that is never linked to the sniper striker, who plays only inside the penalty area, to watch the exchange of roles between Riyad Mahrez, Jesus, Sterling, Foden, Grealish, Gundogan and De Bruyne. With movement and fluidity, the Spanish coach painted her paintings, so the Argentine asked Aguero to leave for Barcelona, ​​​​not regretted by the team's management.

Since “Perfection is for God”, the City team has not been able to crown the precious title, and I mean the European Champions League, so far, and there are signs on the horizon that Pep will review this philosophy of his alone in the world, because his confrontations with some senior people in Europe proved the necessity of adopting it On the heart of the classic attack to secure complete success.

It is unreasonable for City to watch the names and stars that make the spring of rival clubs such as Lewandowski with Bavarian, Benzema with Real Madrid, Halland with Dortmund and Haller with Ajax, as well as Suarez with Atletico Madrid.

Therefore, we may wait for many strings to be modified by the Spanish technician in the upcoming winter and summer Mercato dates, to achieve the city’s dream of grabbing the European Champions League title, for which Guardiola came… Who knows!!!.