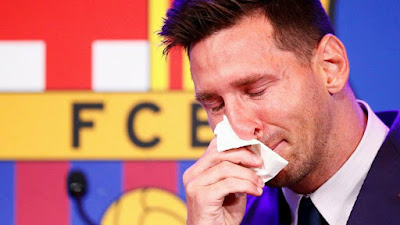 Much has been said and will be said about the earthquake that struck football in the world after Barcelona's decision that Argentine star Lionel Messi will not sign a new contract, amid a torrent of reactions that did not stop and most likely will not stop.

Messi and Barcelona wanted to continue, but something happened that hindered the matter.

What exactly happened that kept Messi away from Barcelona? Many have seen the content of the new laws of the Spanish "La Liga", when registering any new player in any club, the players' salaries must not exceed 70% of imports.

The salaries of Barcelona players are currently 95% of imports, and therefore this literally explains what it means that even if Messi decides to sign for free with Barcelona, ​​he cannot be registered, not to mention that this is impossible because the labor laws in Spain prevent the renewal of contracts with a salary of less than 50% for the year before.

Where is the real problem then? What seems clear and logical is that Barcelona club president Joan Laporta and the club’s lawyer were aware of these laws, and they are well aware of the extent of the economic disaster that the club is experiencing, why all these promises were made before the elections, and why they could not get rid of the high salaries of the players, who by the way did not help at all in Messi survival.

Another mystery arises in this topic. Why did not renew to Messi before the expiration of his contract? At the time, the salary cap law would not have been applied because it would not be considered a new player registration. Who is responsible for that? And what is the role of the “Super League” theme in resolving Messi’s matter? Where some news refers to a great advice from the presidents of the Italian clubs, Juventus and Real Madrid, Andrea Agnelli and Florentino Perez, to Laporta not to agree to the issue of the investment fund put forward by the president of the “La Liga” Javier Tebas, who would mortgage the club for 50 years, as it is said, but it would secure the resources of Huge financial resources, including approximately 280 million euros, which the club receives immediately, allow him to register Messi.

What is also certain in the analysis of what happened is that Messi was really surprised. He believed that things were going to renew his contract. His surprise can be clearly read elsewhere, in a club he agreed with last season, according to many news; Manchester City and its Spanish coach Pep Guardiola. The club, who had known about the matter, probably would not have signed a contract with Englishman Jack Grealish, amounting to more than 100 million euros, two days before.

In front of all these details and away from technical and emotional matters, there is something that many may not have addressed in their comments. We are facing an unprecedented historical event in football, a club that is one of the most famous and powerful in history that wants to preserve its leader, who is considered one of the most famous and strongest in history, if not He is the strongest of all, but he is unable to do so due to stifling financial difficulties that put his future in danger.

This may be a pivotal moment in the concept of football that we are accustomed to, then things will change, of course, there are big clubs approaching bankruptcy, Messi’s story accelerated everything in Barcelona, ​​Italy’s Inter Milan sells “Scudetto” stars, other big clubs are no longer able to do With huge deals, the solutions don't seem close and obvious.

But what is sure and very necessary is that the clubs are currently placing among their priorities the reduction of the salaries of their stars, and they should pay close attention to their deals from now on; Because the catastrophic and financially failing Mercato was precisely what contributed to getting the clubs here. In Barcelona, ​​it is enough to mention three names in order to understand a lot of what happened; Ousmane Dembele, Philippe Coutinho and Antoine Griezmann.