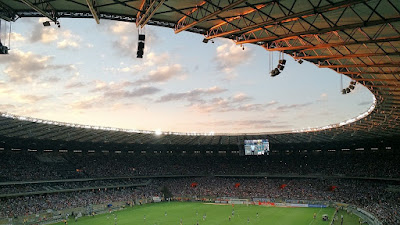 Messi left Barcelona suddenly for free and joined with Sergio Ramos, Donnarumma, and Wijnaldum to the "Parisian", and Ronaldo left Juventus for less than 30 million euros and returned to the "Theater of Dreams" after achieving all his dreams, and he was close to joining the Manchester City team, which brought Jack Grealish, While Romelu Lukaku returned to Chelsea.

Jadon Sancho joined Manchester United, while Kylian Mbappe is close to realizing the dream of playing in Real Madrid, in unexpected crazy deals, and inexpensive for some, at the height of the stifling financial crisis in which many clubs in Europe are floundering due to the repercussions of the “Corona” epidemic and the decline in their incomes. Waiting for the last hours of a summer Mercato surprise, there will be other shocks that were not expected before today, leading some clubs to dispense with excellent players who do not accept to sit on the bench.

No one expected this strange and unique scenario, but since Messi left Barca, all the cards have been mixed up and everything has become possible and can be bought and sold, and the impossible has become possible in the world of football, especially for the big clubs that invest in their financial strength and other crises to attract stars who They are considered a source of income for it and a means of attracting investors and sponsors.

In addition to this, its technical weight makes the difference in all competitions, especially in the Champions League, which is now open to greater possibilities after the balance of power has changed and Barca has become a normal team, and Real Madrid is a strong candidate with the duo Karim Benzema and Mbappe, and the “Parisian” is more powerful with Messi, Neymar, and Manchester City is terrifying, and United are a dream team with the signing of Ronaldo, Sancho, and Varane, while Chelsea has grown stronger after the return of Lukaku.

"The Parisian" without Mbappe will continue to trample everyone in all local competitions, because the presence of Messi, Ramos, Donnarumma, and Wijnaldum will enhance his chances of winning the Champions League, especially if he manages to bring in the Brazilian international Richarlison from Everton, or his compatriot Gabriel Jesus from Man City, to become a team. Dreams, or turn into a team of illusions if coach Mauricio Pochettino fails to recruit stars and loses control of the bench and dressing rooms, and is unable to bear the pressures of the administration, the media, and the club’s fans, who will only be satisfied by winning the European title, despite the difficulty of the task in front of major European clubs who in turn benefited from the madness Happening.

As for Real Madrid, who missed Ramos and Varane, and replaced them with David Alaba, they came closer to embodying the season's deal by signing Kylian Mbappe, who will accompany Benzema in the front line, and find the spaces that he did not have in the physically and tactically strong French League, even Neymar did not find what he wanted, and suffered Lots of injuries.

Which will happen to Messi, undoubtedly, when he finds himself in front of strong and sometimes violent interventions by opponents, but Mbappe will mature and explode in Real, where he will compete for individual titles and be the top scorer of the Spanish League, who will, in turn, restore the luster that he lost with time with the departure of Ronaldo years ago, Then Messi and Ramos this season, although he only attracted Sergio Aguero, Memphis Depay and David Alaba in the summer.

Chelsea, with its squad that crowned the Champions League title, and after the arrival of the rocket Romelu Lukaku, will grow stronger and become the first candidate to win the Champions League and the local league after winning the European Super Cup and the Community Shield at the beginning of this season with the best players currently in the market, like City with Grealish and without dispensing About his former stars, which causes great trouble to Pep Guardiola in running the dressing rooms and the reserved chair.

While Manchester United became a candidate to mix the “Premier League” and Champions League cards, Ronaldo joined at the last moment, after he was close to “City”, and was subjected to severe criticism from the stars and fans of Man United, who consider the transfer of everyone who carried their shirt to Manchester City as a betrayal that should not happen, as he hinted Ex-star Wayne Rooney.

What happened in the madness in Mercato this summer remains a great indication of the many shifts in the standards of the transfer market and its cost, as it is sufficient to point out that Messi, the best player in the world, left for the “Parisian” for free, and Ronaldo moved to United for less than 30 million euros. And if Mbappe remains in the “Parisian” without renewing his contract, he will in turn leave for free to Real Madrid or any other destination, in new scenarios for the world of modern football, and awaiting other surprises in the next two days.